Frankfurt has been one of the most enduring and important trading capitals of Europe form many centuries. Despite a history of war, occupation, and plague, the city continues to rise. Today, Frankfurt is home to The German Stock Exchange, the European Central Bank, and an airport that can handle up to 60 million travelers every year. It is surprisingly relaxed too and a place where beauty and tradition are lovingly enjoyed and cultivated. 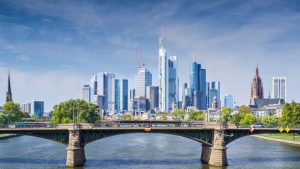 This balance of tradition and dynamism is the best exemplified in Frankfurt’s architecture. Frankfurt is sometimes called Mainhatten because of its skyline that feels American and its position on the Main River. Yet it still nurtures its heritage via restoration and rebuilding projects. Surprisingly, Frankfurt still remains compact despite its financial giant stature. 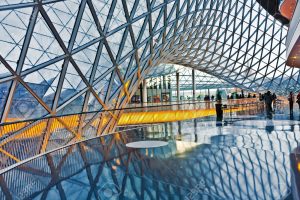 Most of its top attractions are located close to the city center, making it perfect for exploring by bicycle or on foot. Cross the city’s beloved pedestrian bridge Eisernersteg into the Romerbeg, Frankfurt’s ancient heart. Since the ninth century, this medieval square has witnessed the worst and the very best of times from coronations, tournaments, and fairs to firestorms and executions. After its devastation by allied bombs in World War II, many of the important buildings in this square have been restored.

Overlooking the Romerbeg is the Romer, it had served as Frankfurt’s city hall for more than 600 years. Just across the Square, you will see some of this city’s iconic half-timbered houses and the spite of Old St. Nicholas Church. This church survived miraculously during the destruction of this old town. 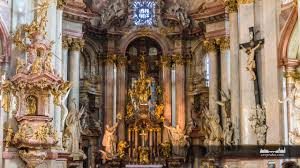 The city’s cathedral the Kaiserdom is about 3-minutes walk to the east of the city in all its golden and red sandstone glory. To the west is the Paulskirche, the cradle of German Democracy. The first elected parliament of the country met here in 1848. Two blocks further is another of this country’s most important birthplaces – Goethe Haus. It is the birthplace of one of the greatest German poet and writer Johann Wolfgang von Goethe.

Head north to Hauptwache from the Goethe family home. Here, you will find Frankfurt’s historic Opera house symphonic curves and the Zeil, an equivalent of Fifth Avenue. The MMK is just a few blocks away. You can explore the modern art world at this gallery that the locals often refer to as “the piece of cake”.

The story of Frankfurt unfolds at the Historical Museum, from its trying chapters to its triumphant. At the German Film Museum, you can explore the history of film from the early optical entertainments to the elements that go into crafting today’s blockbusters.

Relaxation is also an art form in Frankfurt. You can share some brambles if apple wine with friends or soak up the sunshine on the banks of the main. Sachsenhausen is a great place to lose yourself as you will find narrow lanes with some of the coziest pubs and bars in the city.